My long awaited children’s book ‘The Landonauts and the Rainbow Cloud’ (Book One) is now published and available. If it is reasonably successful, I have plans to write more stories with these characters for which I already have outlines. I wish everyone, particularly my readers a very Happy Christmas and New Year.

My accident in September 2015 unfortunately put my writing career on hold. Progress has been very slow, but I’m happy to announce that I’m much better, now, and sufficiently recovered to resume book signings. I’ve advanced from wheelchair to walking frame to wheelie-walker and, at last, a walking stick, which I’m also hoping to ditch quite soon. I’m currently awaiting illustrations for a children’s book I’ve written, which is a complete departure from my usual genre of crime and mystery. But fans waiting for a new novel will be pleased to hear that I hope to begin work on a new one soon.

Apologies to my publisher and venues booked for book signings in the past six months. I’ve been unable to fulfill any of these bookings due to a nasty and stupid accident at home: I slipped in the shower and shattered three vertebrae. The good news is that I’m now walking again, although it’s with the aid of a walking stick. I hope soon to be able to sit at my PC long enough to resume writing, which is usually my main activity. So I hope to please any fans out there by the publication of a new paperback, in 2017 or sooner. In the meantime, if you possess an e-Reader you can download from a choice of seven of my e-Book titles from the most popular e-Book stores online. 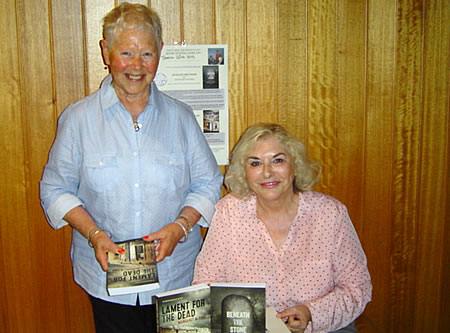 Margaret’s first book signing went very well. She says: ‘It was exhilarating!’ Incredibly, most people bought both titles though she signed more of BENEATH THE STONE than LAMENT FOR THE DEAD. Fingers crossed now that the rest of the tour goes just as well.

Paperback editions of Lament for the Dead and Beneath the Stone are now on the way to bookstores throughout Australia. Her first Book Signing will be in her hometown of Bairnsdale at Collins Bookstore, Main Street. Thursday 27th February at 6:45 p.m.

Paperback editions of Beneath the Stone and Lament for the Dead will be launched December just in time for Christmas.

Positive reviews for advanced copies of the new paperback edition of Lament for the Dead are coming in. Read the first one on my Home Page.

Two of Margaret’s books have been accepted for paperback editions: Lament for the Dead and her latest novel Beneath the Stone. Launch dates soon.

Margaret’s collection of short stories entitled Ten Minutes To Spare is now available in EPUB format on all KOBO outlets.

A small collection of Margaret’s short stories under the title Ten Minutes To Spare will be available for free download on Amazon/Kindle from 20th February for 5 days, and for 90 days on the KDP Select.

Margaret’s eBooks are now selling well in America. And the inhabitants of the cold frontier of Alaska seem to have really taken them to heart. To all these readers, she sends a heartfelt thank you.

All five of Margaret’s eBooks are now available in ePUB format on KOBO, LULU, APPLE and all good eBookstores.

Welcome to the Margaret M Ford website which has been completely updated. You can find more information about Margaret's work on this site now with links to online book stores at Amazon featuring Margaret's work.
There's also a section on other books which are currently being finished and prepared for publishing.

Margaret’s novel Rayne's Summer is now available to purchase from Amazon simply click the link to go there now.

Margaret’s novel Lament for the Dead became available to purchase from Amazon simply click the link to go there now.

On 19th March 2010 Mr. Ken Douglas of Libros International collectively informed all authors that their contracts would not be honoured; the company was discarding paper format publishing in favour of e-books. This was done without any apology or care for those authors, like Margaret, whose novels were ready to go to press, despite waiting patiently for two or more years since signing.

Margaret has subsequently severed all contact with Libros International and is now searching for a new and dependable publisher for her work, and invites any interested publisher or literary agent to contact her.

Lament for the Dead is my first crime novel, for which I found inspiration in a local history book. I read about a genuine historical event occurring in 1903 at a small cottage hospital close to where I used to live in the UK, which I then used to blend into a fictional story. At the time I began writing the novel the hospital was derelict, and the eerie appearance of the buildings and grounds looked like the perfect setting for the nefarious activities of a deranged criminal. The hospital has since been demolished and the grounds now house a gated community for elderly residents.